2017 will be the year of the inaugural RHS Chatsworth flower show and there is a lot of local excitement about this new and prestigious event.

Joseph Paxton was appointed head gardener at Chatsworth in 1826 by the 6th Duke of Devonshire. He proved to be the most innovative garden designer of that era and his influence on Chatsworth remains visible today.

Championing innovation is one of the themes that the RHS will be bringing to their new show to be hosted by Chatsworth from 2017.

Design revolutionaries and the unconventional will also be featured alongside traditional gardens at Chatsworth next June. The show ground will built either side of, and encompass, the river. There will be an interpretation of the Great Conservatory.

There will be design-led shopping opportunities, artisan food and many local businesses represented.

Not forgetting the younger visitors, there will be an outdoor classroom and the opportunity to have a go at well-dressing, a uniquely Derbyshire custom.

For a taster of what’s to come at this exciting new annual event for The Peak District;

Tickets are available now at rhs.org.uk/chatsworth

“Be part of something amazing” 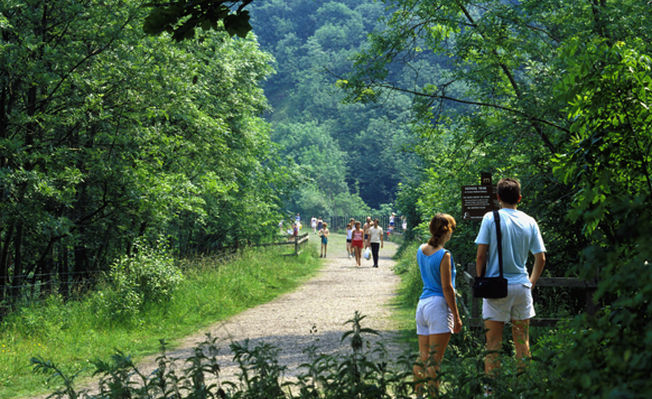 Despite the continual stream of storms that seem to be lashing our shores at the moment we are looking forward to the summer. The Peak District National Park have, for the first time, organised a fund raiser to support the maintenance of the traffic free trails that criss-cross the National Park.

There are 34 miles on 4 distinct trails in the National Park; Monsal Trail; Tissington Trail; High Peak Trail; and Thornhill Trail.
The four separate trails were all former railway lines so all provide excellent recreational and accessible routes through the countryside for walkers, cyclists and horse riders. There are some breathtaking views from parts of the trails, tunnels that bypass the hills and numerous information points that show the history, geology and natural history of the trails.

Each metre of trail costs £5 to maintain. Maintaining the structures, bridges and tunnels along the trail is an additional cost, another £2.5m over the next six years! With decreasing central government funding the National Park Authority have organised a fabulous weekend fund raiser. On weekend of the 19-21 August there will be lots of fun family friendly activities taking place in Bakewell. On Saturday 20 August there will a choice of three great evening walks which you can register to take part in. The registration fee and any sponsorship that you raise will be used in the maintenance of these much-loved trails It is 50 years ago this week since the opening of the Pennine Way, the 268 mile grandad of long distance paths in Britain. The route runs from Kirk Yetholm in Northumberland to Edale along what has become known as the backbone of England.

The route was conceived back in the 1930s by journalist and rambler, Tom Stephenson who was inspired by the long distance trails of the United States. It was to take 30 years, however, to see the dream become a reality.

It is estimated that quarter of a million people use at least part of the trail every year. This number of people obviously has a big impact on the trail itself so many sections have to be actively managed with flagstones and duckboards.

If you wish to complete the walk you can expect to cross more than 430 stone and wooden stiles, open and close in the region of 280 gates and cross 200 bridges! There will be more than 450 route marks to ensure you stay on the right path.

I remember being inspired to complete the long distance route when just a child – not that I have actually done it!

Birthday celebrations are taking place this weekend with more than 50 circular walks taking in the majority of the long distance route. Closest to us, celebrations take place in Edale from Friday 24th April until Sunday 26th.

….does not a summer make" said Aristotle – that’s as maybe but this morning I have seen the first swallow of 2015 and it definitely feels like summer is on the way. It is a mesmerising sight to watch the swallows swoop low across the fields gathering up insects for food.

Every year these amazing little birds make the journey from southern Africa, across the Sahara to breed in the northern hemisphere. They return to the exact same nesting sites year after year.

It is said that the swallow’s forked tail comes after an angry God threw a firebrand at a swallow that was stealing fire for the people. As it flew away the firebrand burned away the middle feathers of the swallow’s tail. The real reason is much more mundane in that having a fork in the tail increases the efficiency of flight.

For a few weeks now, the curlews have been seen and audible over the fields locally. I always think that they look rather out of place with their long, slightly curved bills, much suited to feeding in soft sands and muds of the coast. They really do grace us with their presence.

They can feed successfully on insects in the shorter grazed grass of managed farmland, especially if the ground is slightly boggy.

Quite often you can hear them without seeing them. They make a very distinctive plaintive sound from which the bird gets its name.

They choose to breed in inland areas. They build their nests on the ground, primarily on moorland. For that reason, if you are out in the summer walking your dog on the moors, please do keep it on a lead.

Another migratory bird that visits for just a few months before returning to northern Africa is the Ring Ouzel. It looks very like a blackbird but has a tell tale white band across its chest.

The name “Ouzel” comes from old English and means “common blackbird”. The Ouzel is very shy of humans, unlike the blackbird, which probably explains its now relative rarity.

It also looks similar to a dipper but is unrelated to it. You will sometimes hear of the dipper being referred to as a water ouzel

The Ring Ouzel feeds on worms and insects and on berries in the autumn.

Like the curlew, it also nests on moorland, under heather or bracken.

Unfortunately, numbers in the Peak District are declining so this is the bird that you will have to work the hardest to spot.

North of leek and south of Buxton, the Roaches are regarded as an “Area of Outstanding Natural Beauty”. On top of the rocky outcrop you can see (weather permitting!) the plains of Cheshire to the west and the forbidding moors and dry stone walls of this corner of the Peak District to the east.

The Roaches are a coarse sandstone called gritstone. The land was once the gritty bottom of a huge delta that covered a lot of what is now England. Around 300 million years ago the delta bed was pushed up into a vast dome. Over subsequent millennia, the central area of gritstone was eroded away leaving escarpments of rock in the west (The Roaches) and in the East (Stanage, Baslow and Froggatt Edges)

One of the most popular activities on The Roaches is rock climbing. There is something for everyone with climbs from moderate to extremely severe (for those in the know about these things). Pegs have not been left permanently in the rock faces so the faces are “clean” for the next climber

Lud Church is a 15m deep, 100m long chasm which you can walk through. Said to be the inspiration for the Green Chapel in 14th century tale of Sir Gawain and the Green Knight it was formed by a landslip. Having its own microclimate, it is a great environment for ferns and mosses to thrive, and for walkers seeking some shelter from the wind!

In the summer, you should look out for peregrine and red grouse in the air. On the ground look out for wallabies (yes, I’m serious!) last seen in late 2014. Originally they were released from Whipsnade Zoo in the late 1930s. The genetic pool of the released animals was limited and very close so it was believed that they had died out. It would be fabulous to think that this wasn’t the case and that they are still there.

The Roaches Appreciation Society web site is a great resource for finding out more about the area.

Follow this link for a challenging walk in the area.